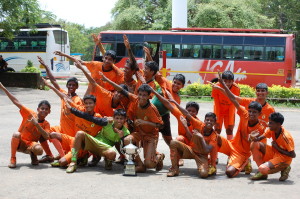 9B take the Joffre Cup away from 10 A 9B scored a dramatic dying seconds equaliser against 10A to take the finals to penalties.10A opened the scoring in the first 5 minutes of the game when 9B goalie Somesh failed to judge a throw in.The ball bounced over his head into the goal.9B came back strongly and scored an equaliser in the first half.10A took the lead again and kept that lead till the last 60 seconds of the game. Myron Fernandes became the hero of the day for 9B when he came up with the equaliser.
The 10 A goalkeeper failed to keep out his long looping shot at goal.The game went to penalties and 9B emerged the ultimate winners.
This is now the 3rd time that Class 9B has won the tournament since its inception in 2009.It has been won by 10 A once in 2009 and by 10B in 2012 and 2013.9B has won it in the other years.
Congrats to all the football players of RMS for giving us a great tournament this year.

9B take the Joffre Cup away from 10 A