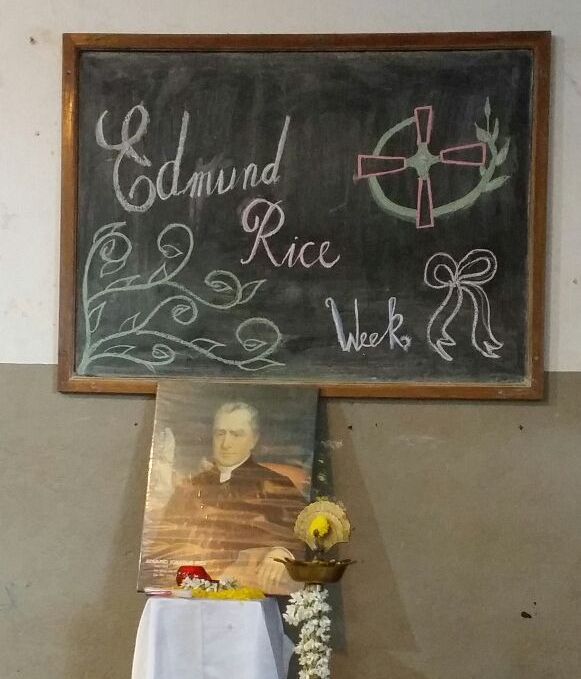 The Edmund Rice Week activities in school started on the 22nd of August- which incidentally is also the Feast of the Queenship of Mother Mary and hence the Regina Mundi School Feast.
Events that have concluded when reports last came in include the following:
Junior Singing,Just a Minute,Wealth out of Waste,senior singing and vegetable carving.

A write up on events of the first two days has been sent in by faithful RMS reporter Ana Paes.

Edmund Rice Week Begins
The Edmund Rice week which most of the students were eagerly looking forward to has begun on the 22nd August 2016. The morning’s assembly was conducted by class 8B on theme “I can Do It”, which was a very appropriate theme as all the competition were to begin that day. The week of fun will end on the 27th of August. The various events that will be held this week are Western Singing, Just a Minute, Vegetable Carving, Wealth out of Waste, Instrumentals, Multi Media Presentation, Poster and Calligraphy, Photography, Fabric Painting, Spelling Bee, Mute Beat, Quiz and Dance.
Just a Minute
Just a minute was the second event in the Edmund Rice week. It was totally fun. It was wonderful to watch the students who talk so much in class struggle for words on stage. There were three rounds. The first round was started off, strong, by Ana Smriti Paes of class 9A. She managed to speak about a talking tree in her backyard for a whole minute without any interruptions. The round went really well except when it came to speaking about “The elephant with two trunks”. Some of the participants found it hard to remember that ‘the’, when placed before a vowel has to pronounced such that it rhymes with ‘she’. Sara Kriti Paes attentively banged the desk and pointed this out. In the third round, it was Sara Kriti who spoke for a whole minute without any mistake. The two challengers had to take back their rejected challenges. At the end of the three rounds, Ana Smriti was first followed by her sister who was the youngest participant being only from class 8, Sara Kriti. Nivan Braganza from class 9A was in the third place.

Western Singing for classes 8, 9, and 10
On the second day of the Edmund Rice Week 2016, Western Singing was held for classes 8, 9, and 10. There was an awesome display of marvellous voices, both solo and group. This year, students sang a lot of popular numbers. The first place in in the solo category was bagged by the head girl, Glaviza Correia, who sang ‘Love Yourself’. The second place went to the head boy Varel D’souza and the third place went to Vernon D’sa. There were many first time singers like, Shanice, Dion and Ana.
In the group category, the well-deserved first place was bagged by Anonymous Unknowns for their song ‘Counting Stars’ which sounded almost like the original. The second place went to Glaviza and her group. The third place went to Dion and his group. A new addition this year was A Capella by Shanice and her group. Although it wasn’t up to the mark, they were the first ones to try it out.
Wealth out of waste and Vegetable Carving also showed some wonderful art. The results of these competitions will be announced soon.
Some photographic evidence of the events.