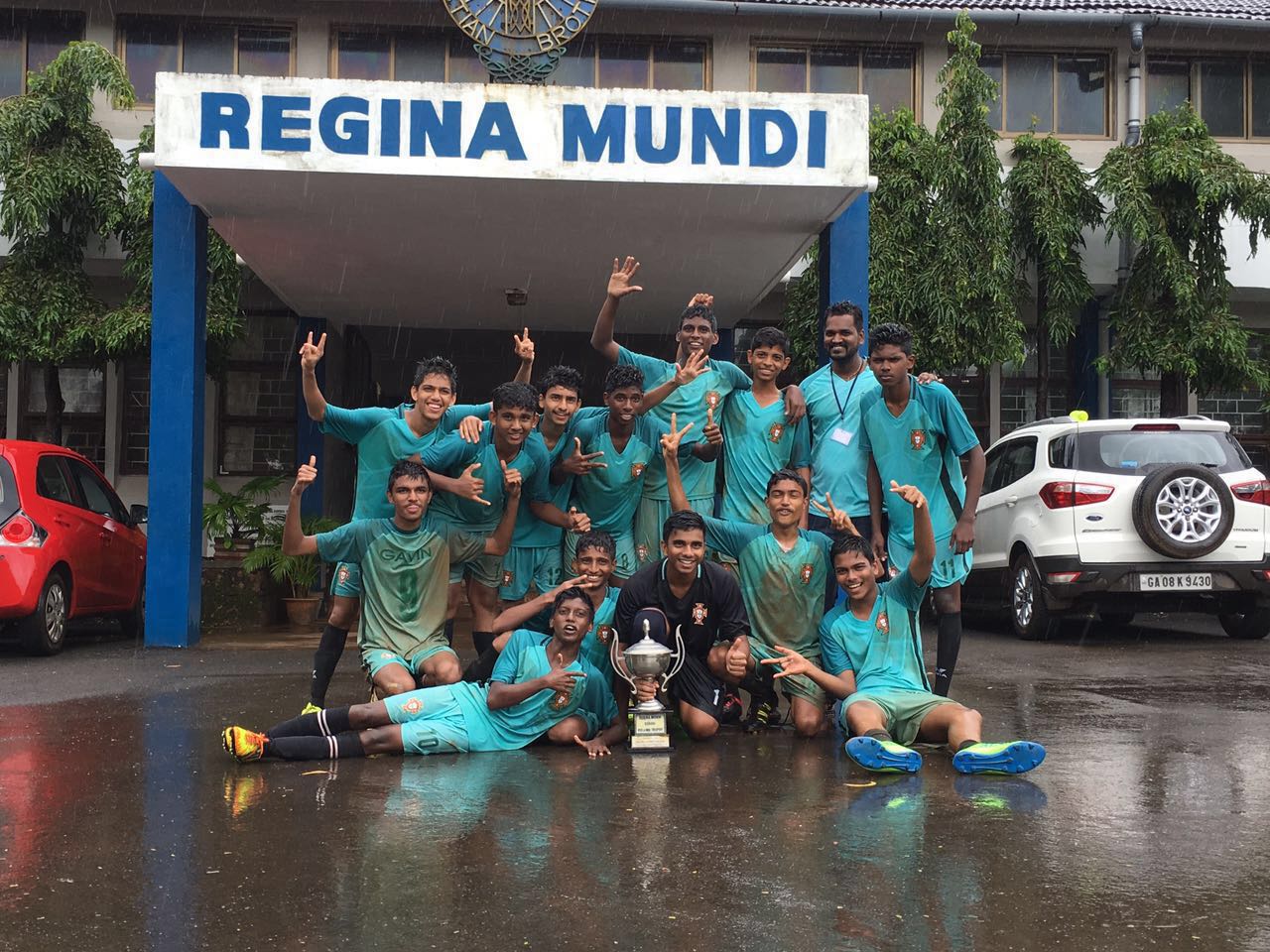 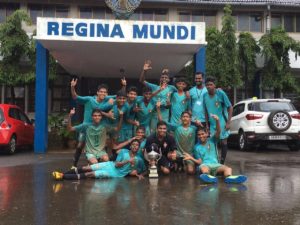 Class 10 A became the first class in the history of the Joffre Cup Tournament to win the Cup for two years in succession.They beat Class 10 B 3 -1 in a penalty shootout.The photographs of the classes that have won the Cup since its inception in 2009 can be seen here..

Sir Viraj,who teaches history,is really happy that his team have created history.The winning team  and him pose joyously for the camera. 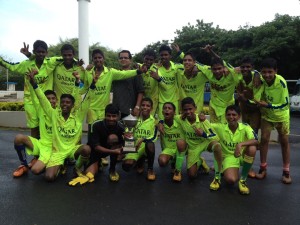 And here’s  a photo of the same team after winning last year’s cup.

A detailed report on the final match and the other games has been sent in by RMS reporter Ana Paes.

The marvelous and fun-filled week of football has come to a glorious end for class 10A as they lifted the coveted cup once again! In a very tense and exciting final match, they played against class 10B. Both the teams seemed to be equally good with great goalkeepers. 10B scored first. Stalen made the score 1 – 0 in favour of his team after converting a penalty given for a  foul in the D.

10 A put a lot of pressure on them after that but the first half ended without them being able to get an equalizer.

In the second half 10A’s persistence was rewarded.10B’s defence finally crumbled under their repeated attacks on their goal and Lenin put in the all important equalizer.

After that both  teams tried very hard to get a winner.Supporters from both teams  cheered their and hearts and their throats out for them.

The game however ended with the scores being tied at 1-1 and the dreaded penalty shootout ensued.

Richie came up confidently to score for 10A and his shot surely hit the net. A thunderous cheer went up from the 10A supporters, and  10B fans held their breaths with fingers crossed. Rivo shot next for 10B and he missed. Valentino then scored again for class 10A making it 2 – 0 Goal-scorer Stalen came up next for 10B and he too missed much to the heartbreak of the 10B supporters. This was followed by misses from Lenin  of 10A and Hamza from 10B.

Levon came up to take the next shot for 10 A . A goal would win it for his team.Just then the heavens opened up and  a heavy shower ensued.

And in the pouring rain Levon scripted history for 10A by scoring. The rain hid the tears of 10B and washed them away. If 10A were crying – it was tears of joy.

Congratulations to them for becoming the first class ever to win the Joffre Paes cup for two years in a row.

The seventh and eight standards saw class 8B winning their tournament, again, on penalties. In the fifth and sixth standard category, class 6A won.

The girls meanwhile, also had some stunning matches, although they weren’t the best football matches and did not have that high quality. 9B claimed the title of ‘Champions’ in the ninth and tenth standard group after beating class 9A 2-0. Arfa and Crystal won it for them. In the seventh and eighth standard group, 8A girls made history for their team after beating class 8B 3-0 for the first time in four years. The class 6B’s girls team won the finals in the fifth and sixth standard category.