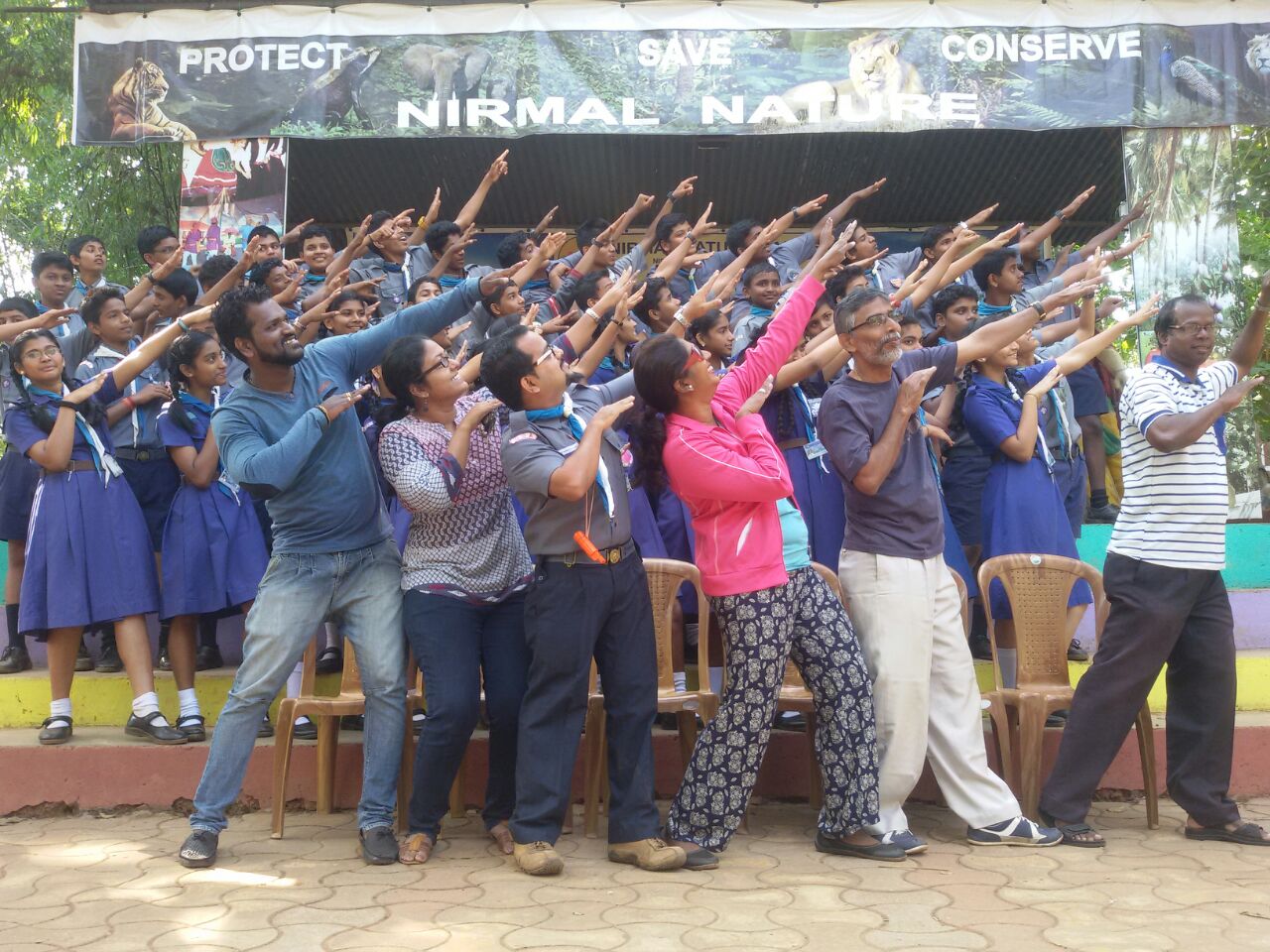 That most looked forward to of events in the school calendar- the annual scout guide camp – took place at the Nirmal Nature Campsite from the 30th of November to the 2nd of December.
This is the third year in succession that the camp has been held at that campsite.Everyone had a lot of fun.However having the camp at a readymade campsite has resulted in the passing away of some of the old and also fun traditions of campsites of years gone by.

The old homemade tents.
In the old days the scouts and guides had to survive two nights out in the open in tents made of bedsheets stitched together.
This feat of engineering was accomplished by the scouts and guides bunking several periods and having a lot of fun in school stitching bedsheets together while trying not to cause any serious injury to themselves with the needles and also waste as much time as possible at the same time. The first task of the scout camp was then to pitch the tent that they had made.This was a perilous endeavour as many times members of various patrols ended up with the tent wrapped around themselves before they finally got it right. 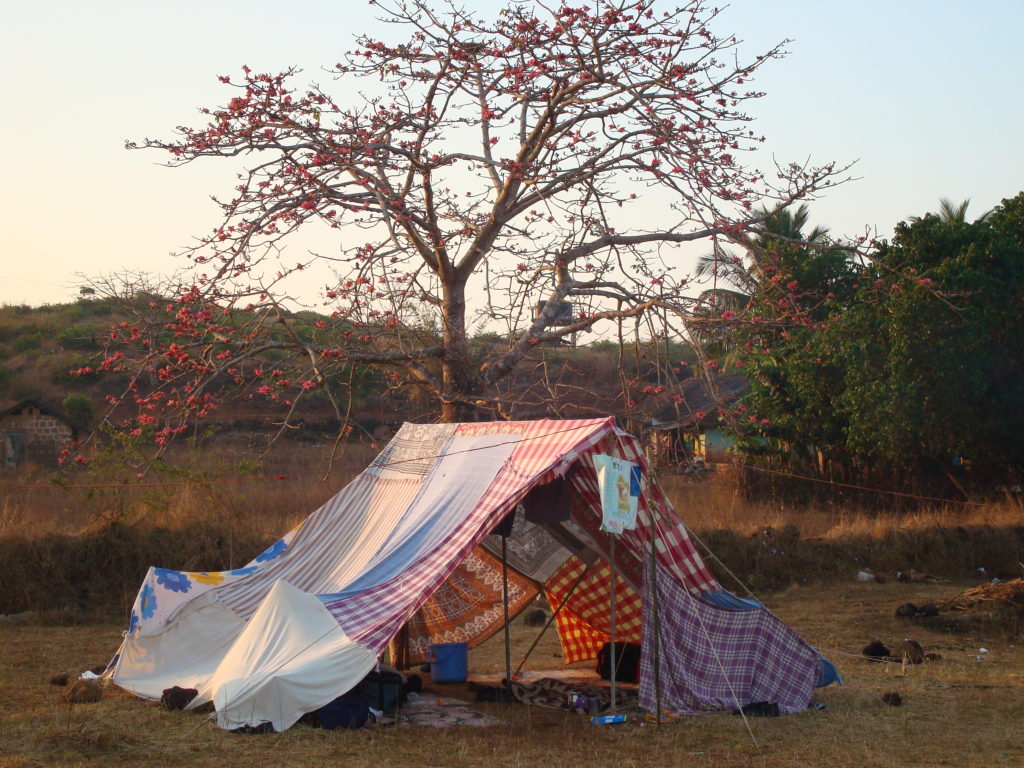 When they eventually succeeded it ended up looking something like that- a marvel of low tech,low cost,temporary housing.(The tree at the back was optional.)
Here’s an old filmit movie that will remind some of us of the fun and chaos involved in the tent making that preceded the camp.

And to move from the nostalgia of the past to the fun of the present here’s a report on the camp that was held this year.It is submitted by our faithful (and currently one and only) reporter Ana Paes.
Scout and Guide Camp 2016
The much awaited Scout and Guide camp finally took place from the 30th of November to the 2nd of December. The scouts and guides of class 9, along with Sir Nagesh, Sir Viraj, Sir Manoj,Ms Marilyn, Ms Linda and Miss Marrietta left for, Nirmal Nature campsite, Tilamol, Quepem, by train from the Vasco Railway Station on the morning of 30th November. We reached Savoddem Railway station where we got down and rode tempos to reach the campsite. The journey was so much fun!
When we reached there, the owner Mr James first addressed us and then we were allotted our tents. We then had flag hoisting. On the first day, all the patrols were asked to make at least five gadgets with some sticks and rope. We were then tested on our knowledge of the laws, promise, flag song and prayer song. After lunch, we had a talk by Mr. Chandrakanth Shinde about the awareness of snakes. He also showed us some live snakes that some students were priveleged to touch. Sir Manoj even challenged Sir Nagesh to hold the huge Rat Snake, which he accepted!
After bath and dinner, all the patrols got ready for the exciting campfire activity. The patrols had to either perform a song or a dance. Guides were requested to dance rather than sing. After the performance, we were expected to teach the whole troop one yell. We witnessed a very exciting campfire with some awesome dances and nice singing! There were also some rather good yells. We also saw the other side of our teachers with Sir Viraj’s dancing and Sir Manoj’s singing. At aound 11 o’clock, the lights went out but the excitement brewing in many of the scout’s and guide’s minds did not allow them to sleep and so they created a havoc till 4 in the morning.
The next morning, the teachers were in a bad mood because of our behaviour and they were tired because of lack of sleep. So after breakfast, we had to skip a few activities. We then had corner decoration for the scouts while he guides had to create a living room in their tents with whatever they had inside them. There were some really nice results in these activities. After lunch, the patrols had to perform an advertisement each. This contest showed some really funny ones including one advertising for Chorizo Pao! Then was the Pagentry show. The students dressed up in lovely costumes to depict different scenes given to them.
After an evening snack, we all enjoyed the adventure time. We could do all sorts of things wih the adventure equipment there. There were rope bridges, monkey bars and tree houses. Thet was really fun. That evening, for the campfire, the students had to perform short skits. Some patrols had some nicely practiced skits! Some boys even dressed as girls! That night,everybody tuned out at 12. Nobody satayed awake because we all were very tired. Even the teachers must have got a good rest.
The next morning, after breakfast, we began packing to return back to school. We left at around 9:30 and returned back happy after an awesome camp!