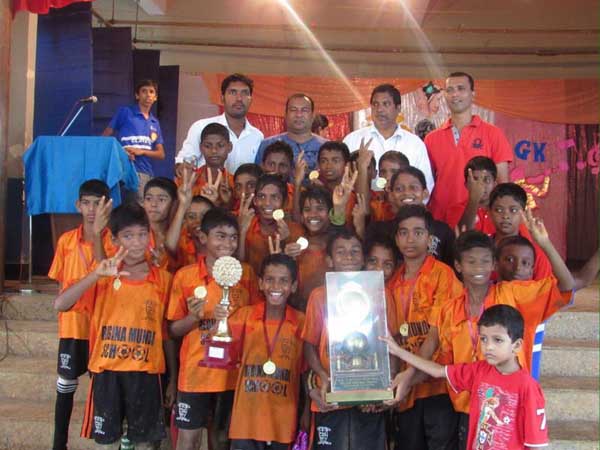 The Regina Mundi team trounced Loyola High School 3 – 0 to win the 2015 Slattery Memorial Cup.
Loyola went into the finals looking like the better team but RMS team decided that they were not going to be beaten on their home ground on Founder’s Day.
This is perhaps the first time that the Slattery Memorial Final was played on the 29th of August.
Caine Moura was the hero of the day – scoring two goals.The third was scored by Johann Mesquita
Some photographs of the Trophy Presentation Ceremony.

Sidney Lucas was selected the best player of the tournament and Sherwin Abranches was named Best Midfielder.This is the third time that Sir Allan’s team team has won the Slattery Memorial Tournament ever since he took over from Sir Vijay Kumar. So Sir Allan completes a hat trick of Slattery Memorial Wins and needs special congratulations as well.

A big hand also to all the ex students who helped in many ways to make the 2015 Tournament a success.