RMS has received news of the tragic death of yet another ex student in less than a month.
Abraham Karu from the batch of SSC 2012. Death by drowning about three days ago.
In the class photograph above he is in the first row of students standing behind Sir Manoj – second from the right.

Teachers will remember him as a quiet,well behaved student and an extremely talented artist.
This drawing done by him when he was in school still adorns the walls of the school art room. 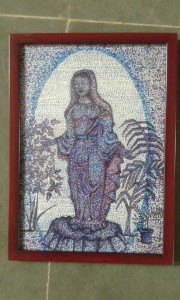 The photograph below shows the batch of 2012 shortly before their farewell party.Abraham is in the front row of the 0 in 2012.
Who could have known that in 3 years time he would be saying farewell forever.

May he rest in peace and may his sorrowing family and friends find solace in this time of grief.