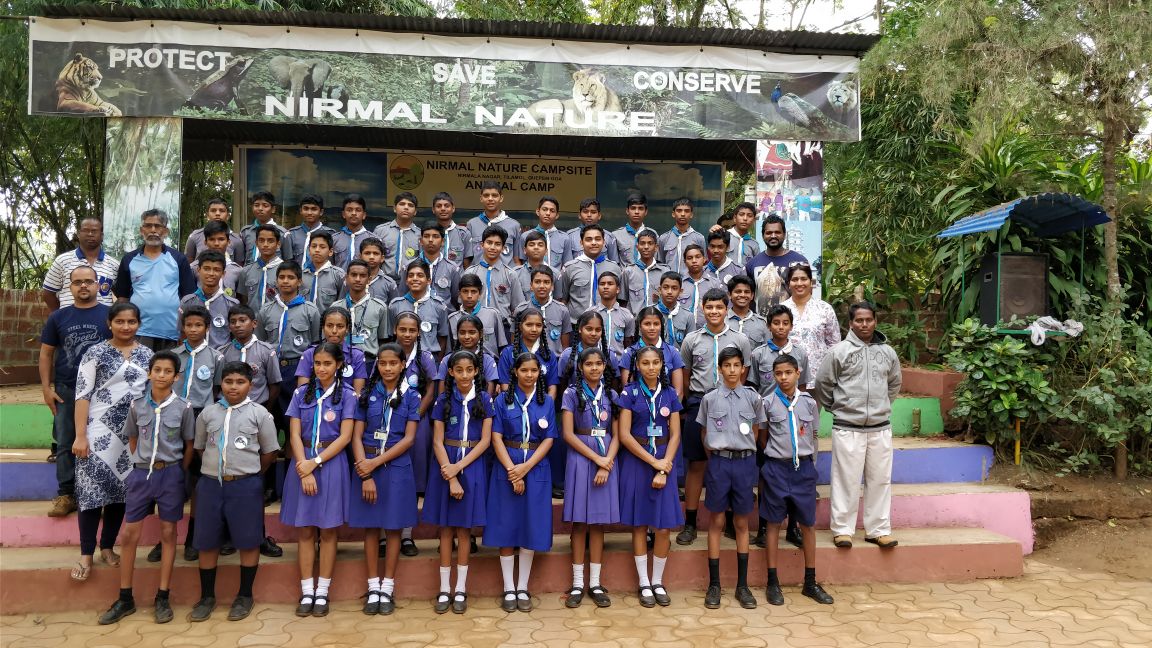 The students of class 9 had preparing for this for weeks. And at last that long awaited day had arrived. On the morning of the 29th of November 2017, the class 9 students of Regina Mundi High School along with a few teachers set out by train to go to the Nirmal Nature Campsite in Tilamol, Quepem. After disembarking the train at Curchorem, the scouts and guides travelled to the campsite by separate tempos. It was an amazing experience to be thrown about the tempo thanks to Goa’s ‘curly’ roads.

On arrival at the campsite, we were warmly welcomed by Mr. James Fernandes, the owner of the campsite. We hoisted the Bharat Scouts and Guides flag and soon after set out to make our gadgets. Not long after finishing that we had an inter-patrol vegetable/ fruit carving competition. It was quite astonishing to see the most unexpected people carve so beautifully! After lunch and a tea that day we had a s presentation by Mr. Chandrakanth Shinde, who showed us the gentle side of snakes that we often overlook. After dinner, we had our first campfire where we performed our advertisements and yells patrol wise. We had a great deal of fun and our otherwise sober teachers sang, dance, laughed and had fun with us.

Early the next morning we were woken up by the sound of a cock crowing in the distance. All of us went for a light jog which was followed by Lord Baden Powell’s six exercises. After hoisting the Bharat Scouts and Guides flag, all of us were seated for the prayer for all faiths. After Breakfast, we had corner decoration and tent layout competition for the scouts and guides respectively. After lunch we had wealth out of waste making competition which followed a series of games which all of us enjoyed. After the games came the long awaited pioneering and adventure activities. We had a lot of fun while jumping, climbing and monkeying about. After dinner, that night, we had and enjoyed our last campfire where we performed the skits we had prepared. And did we laugh our heads off at our budding tiatrists!

The next morning after doing Lord Baden Powell’s six exercises and hoisting the flag it was time to pack up. As we packed up our belongings we also took with memories and lessons we learned from our camp. Just before leaving, we lowered the flag we hoisted and said our last goodbyes to the place. We boarded our buses and we were back in school before we knew it and we resumed our systematic lives once again, with our camp as just another memory in the journey, ‘School Life’.